Needless to say, Japanese company names often come up in the course of translating Japanese material into English. For big name companies like Sony or Hitachi, finding out the official company name (i.e., does it, say, end with “Co.” or “Inc.” or perhaps another designation?) can be as easy as typing that name into Google, or even the English Wikipedia. For smaller companies, however, the process can be a little more complicated.

First, go ahead and pop that Japanese company name into Google and see if you can’t find the company’s homepage. Be careful not to just pick the first result that comes up – sometimes you will find companies with more or less the exact same name and who may have completely different official English name translations, or you might hit upon the website of a subsidiary or the parent company of the company you are looking for, instead. Also, you might be tricked into thinking a page dedicated to the company your looking for on a website which aggregates information about other companies is the website you are looking for. The latter is more of a problem when translating from Chinese, however.

Now, assuming you’ve found the real website of the specific company you are looking for, look at the top of the page and see if a banner image, etc., already shows the English name of the company. If not, see if there are any buttons near the top labelled “English” or the like which will take you to the company’s English website and, hopefully, their English name. Failing either of the above, scroll to the very, very bottom of the page. Many Japanese websites will use their English name for a copyright notice listed at the bottom of the pages on their website.

Next, and in conjunction with the methods detailed above, look for the company’s self-introduction page, often linked to under a button labeled with “[Japanese company name here]とは” or occasionally (and in English) “About” or similar expressions. The company’s self-introduction page will almost always list, in a tidy little table, basic information about the company such as their name, who the president is, how much capital they have, and what sort of business they do, among other information items. In addition, companies often list the official English translation of their company name here. I have often encountered cases where the English name here and the name used at the bottom of the page for the copyright notice and even on the official English site differed, so it’s important to check here even if you find an English name for the company elsewhere. If there is a discrepancy in the names provided, I would recommend first going with the official English name translation provided in the company information page, unless the name listed there is patently inappropriate for some reason. At any rate, if there is a discrepancy, regardless of which name you choose to use, be sure to leave a translator’s comment in your translation (via the comment feature provided in various document applications or, more traditionally, a highlighted comment in parentheses within the text) indicating the discrepancy and why you chose the name you chose as well as any recommendations you might have concerning the English version of the company name.

For example, if the company you are looking for is named “大田重工業” (a name which I just made up and bears no relation to any real companies) and you know the company is located in Ota (大田), Tokyo and not in the city of Tsuyama, Okayama (which has a neighborhood whose name is also written “大田” but which is pronounced “Oda”), you can be pretty sure the company’s name is pronounced Ota Jukogyo and not Oda Jukogyo. Using the Japanese version of Wikipedia can be a big help in finding out whether there are any regional names which use the characters you are looking for and where they are located. If the company name you are looking for is apparently using a place name as part of its name, even just knowing what half of Japan the company is in can sometimes be a big help in narrowing down how it’s supposed to be pronounced.

Now that you’ve figured out the pronunciation of the name, you can test it out to see if it’s ever been used in English. You can try typing variations of the name, in English letters, inside double quotes in Google (to specify you want exact matches only) to see if the company has ever been mentioned in any news articles or websites which aggregate company information. If you get any hits, be sure to compare the information on the page to see if it seems to match the company you are looking for. If the company name contains any general terms (like 重工業 mentioned above), you can try typing in different translations of those terms plus the place or personal names that are part of the name with and without double quotes to see if you can any hits or near hits. With any luck, you’ll find a more or less “official” English name for the company.

If searching on Google proves unsuccessful (and assuming you’ve at least discerned a likely pronunciation for the name), you’ll just have to write the pronunciation of that name in English. In this situation, do not, I repeat, do not “translate” the name. Just leave it as is. The standard protocol if you don’t have an official translation for a company name is to just write it in English letters and otherwise leave it untranslated. For example, if the company’s name is “大田重工業株式会社” (or “株式会社大田重工業”, the placement of the “株式会社” part doesn’t matter) and you have no official name for it, you would write “Ota Jukogyo K.K., not “Ota Heavy Industries Co., Ltd.” (the “K.K.”, short for “kabushiki kaisha”, is how you typically write the legal designation of “株式会社” in English if there is no official translation [even though it’s really pronounced “kabushiki-gaisha“, I know]). The “untranslated” abbreviations of other Japanese legal designations, in the rare case you encounter them and don’t have an official English name, can be found with some Googling.

Regardless, and again, in any situation where you are not 100% certain what the company name is, be sure to leave a translator’s note explaining the situation.

As for romanization systems, you may have noticed I used a modified Hepburn romanization (if you don’t know what that means, take a quick trip to Wikipedia-ville). Hepburn includes a system for writing long vowels, but I omit long vowels as I feel using this will just confuse readers not familiar with the way Japanese is spoken, and this seems from my limited experience to be the majority view among translators. So, for example, I write the long “o” sound in 大きい(おおきい) and 書道 (しょどう) as just another “o,” not “ō,” “ou,” or “oh” (or possibly “oo” in the case of 大きい, which would be even more confusing for those not familiar with Japanese). Regardless of which romanization you choose, be sure to use it consistently throughout the document and, if the document is to be part of an existing translation, be sure to follow the existing romanization scheme being used.

Lastly, if possible, it’s best to just ask what the official English translations are of any company names that appear in the document to be translated before/when you accept the job. Of course, if the client has no direct connection to the companies listed in the source text, you will most likely have to revert to the method described above.

While I have heard and read about what one should do, legally speaking, when becoming a freelance translator in other countries, I have not yet seen anything that covers becoming a freelance translator (or any other kind of freelancer) in Japan. In fact, it is exceedingly simple and painless. All you are required to do is file a single document, 個人事業の開業・廃業等届出書 (available here) with your local tax office (税務署; find the one nearest you here) declaring that you are starting your own business. There is no need to obtain a business license, tax number, etc.

Actually, like many laws in Japan, although you are “required” to file this document, there are no punishments for failing to do so. However, 1) you should do it because you are a good citizen, 2) it’s incredibly easy to file (see below), and 3) filing it enables you to enter the money you earn translating as business income (営業所得) on your tax return rather than as miscellaneous income (雑所得扱). It’s also required if you want to file the fabled blue tax return (青色申告), which offers all sorts of benefits for business owners but looks to be a real pain to file, so I’m not bothering with it for now (learn more from this pamphlet here).

You’re also supposed to file it within one month of starting your business but, again, there are no punishments for filing it later than this. 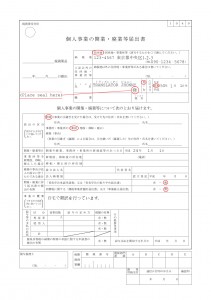 Anyway, as I said, filing the 個人事業の開業・廃業等届出書 is easy. The following instructions assume you are (or will be) a freelance translator operating out of your home and have no employees. I’ve provided an example form on the right. Click to enlarge.

First, in the 納税地 section, circle 住所地 and fill in your address and phone number. A cell phone number is fine. Next, since your “office” and home are the same, skip the next section (上記以外の住所地・事業所等) and fill in your name, circle your sex, and write in your birthday using the Japanese year system in the appropriate boxes. Don’t forget to add your seal (a signature may be acceptable as well – check with your local tax office). In the 職業 section, write “翻訳者.”

In the 届出の区分 section, circle 開業 at the top. The address line below that is only used when you move, so there’s no need to fill that in (conversely, should you move, you have to refile this document with your new address; you also have to file it again should you stop your work as a freelance translator and “close” your business, hence the 廃業 part). Below the address line, circle 新設 to indicate that you are opening a new office.

Skip down four sections to the section called 開業・廃業に従う届出書の提出の有無. There are two sub-sections here: 「青色申告承認申請書」又は「青色申告の取りやめる届出書, which concerns the application to use the blue tax return; and 消費税に関する「課税事業者選択届出書」又は「事業廃止届出書」, which is for consumption tax exempt businesses that wish to be taxed regularly. For both subsections, circle 無 (unless you want to do the whole blue tax return thing, in which case, consult with a staff member at the tax office first).

Now all you have to do is give it to one of the staff at the main reception desk in your local tax office. They’ll stamp it and probably offer to give you a copy, as well. They won’t even ask to see your ID or visa status. There’s also no need to confirm anything – you’re all done! Just don’t forget to keep records of all your income and business expenses and file your tax return on time.