Perhaps it is a testament to how well I make them, or perhaps to how “Westernized” (or at least “not very Japanese-like”) my girlfriend is, but I have gotten her hooked on PB&J sandwiches, This is remarkable in so much that Japanese people, at least the rare ones who have tried PB&J sandwiches, hate them (as do many Europeans, so I hear, but I have no means to verify this). I like to think that the reason most Japanese people do not like this American culinary tradition is because they have not had a good PB&J sandwich. I suspect that if they have had one, or attempted to make one on their own, they have used Japanese peanut cream and Japanese jelly. 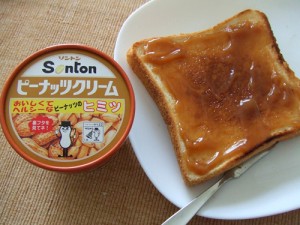 I once had some Japanese peanut cream that tasted likely the inside of a Reese’s Peanut Butter Cup, only creamier, and it was truly sublime, in a junk food kind of way. I have never been able to find it since, however, and every other variety of peanut cream I have tried has been a bizarre, translucent caramel-colored slime which tasted neither of peanuts nor butter nor the flavor of anything else I have tasted yet so far but, to describe it more succinctly in three words, is not good. Of course, Japanese people, or at least some Japanese people, like peanut cream, or it would not be on sale. Human beings tend to like what they were fed as children, regardless of how people from other cultures may feel about it as adults. Still, I do not feel peanut cream is an adequate substitute for true peanut butter, which is generally available in Japanese supermarkets (usually only Skippy, the chunky type, luckily my favorite). American peanut butter is, however, very expensive, and I have heard Japanese complain that American peanut butter is too hard to spread and too sweet. As to the first criticism, I suspect they are putting it in the refrigerator, which of course would make it a bread-destroying nightmare. As to the second, I don’t know where this is coming from; in my experience, Japanese peanut cream is far sweeter than Skippy peanut butter.

The other essential half of the PB&J equation is the “J”, which most people take as “jelly”, but I far prefer jam. This, again, is where I suspect the scant few Japanese who have tried PB&J sandwiches (and didn’t like them) have gone wrong. Even American jelly is an oversweet sludge far distanced from its fruity roots, and Japanese jelly doubly so. Here in Japan, I use an imported French jam with no sugar added from the local import shop. If I were in America, I wouldn’t dream of being such a snob and buying such an expensive jam, but so far it is just about the only real jam I have been able to find, and, thanks to the no added sugar, is not too sweet. I also almost always use raspberry, both because it’s my favorite fruit and because it balances well with the slight saltiness of the peanut butter without overpowering it.

This, anyway, is the recipe I use when making PB&J sandwiches for my girlfriend (Skippy chunky peanut butter and no sugar added raspberry jam), and she can’t get enough of them.